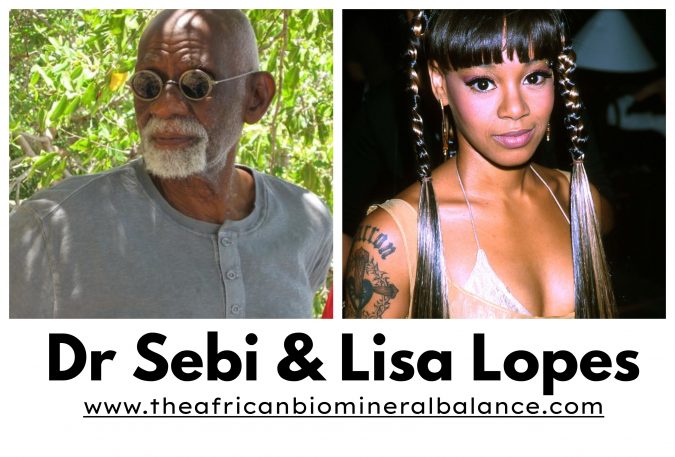 Man:
In the tiny village Lisa sought guidance for body and soul from an herbal guru named Dr Sebi.

Lisa:
Dr Sebi you know according to him can cure anything, everything from trying to lose weight to you know looking for a cure for AIDS. People go there with hopes and dreams that Dr Sebi can somehow save them.

Man:
She had been through so many intense problems in her career and in her life and in a personal life that she didn’t know where to turn and this doctor she said had shown her how to really open up and and cleanse all of the negativity out of her.

Dr Sebi:
She told me she was suffering with alcoholism and that she was smoking excessively, cigarettes, drinking and smoking. She asked me what do I need to do to stay on the side of peace. I say fast, do what Jesus did. She said what did Jesus do? He fasted for 40 days and 40 nights.

Man:
Midway through her 40-day ordeal and obviously gaunt Lisa spoke with MTV news. I’ve been polluting my body for 30 years, 40 days is not a long time to me to fast. 40 days represents overcoming death. It’s, it’s the number of days that Jesus fasted for and I kind of feel like I’m on a journey sometimes don’t really know quite where I’m headed.

Dr Sebi:
At the end of the fasting she came to me, I heard the door opening at two o’clock in the morning. She said I completed my fast this morning. I said what did you see. I saw god.

She said I’m going to make you famous. I’ll say how, because I’m going to talk about you. Does everyone know you cure AIDS and cancer.

Lisa:
There’s just a lot of people in the world who are suffering they’re sick they’re not happy they’re looking for answers, they don’t know where to turn well, I know a man who’s been curing AIDS since 1987. This guy has taught me a lot and I need to share my knowledge you know with the world.

Lisa:
My personal experiences with Dr Sebi and the herbs that I have taken and also the village in Honduras that I have personally been through several times on several occasions so the video that you guys just saw um they have been there so you have to go there to get the real you know idea of what this place is like because words cannot describe it. I met Dr Sebi me, about four years ago and um before I got a chance to actually go to the village in Honduras. I was take, I took his herbs now he had several herbs. The one that I personally chose to take was a 10-day cleanse and it’s because at a time in my life kind of felt like the world was on my shoulders. I didn’t know what to do I didn’t know if I needed to get to the top of a mountain scream, you know. I was just, I just had a lot going on with myself and you know they say when you cleanse you know it’s not just a physical thing, but it’s it’s also like the emotional thing so um I did the cleanse. And before I did the cleanse I ate everything you know I was raised on everything. So after I did the cleanse you know I had to give up the meat, the dairy, the sugar, the alcohol, the soda, the acid, the breads the pastas almost everything but um for about 10 days I moved on juice, 100 juice, water, sea moss, fruits and vegetables and after a 10-day period. I only needed four hours of sleep a night. My energy level was incredibly high, my intuition was on point. I could tell you who was knocking on the door before they knocked it. I could tell you it was coming out before they called. My sentence was you know, they were there, um I had no desire whatsoever to eat any of the things that I had eaten before the cleanse because I felt that good. Um before I did the cleanse, I had eczema, it runs in my family you know, I didn’t have it that bad but every once in a while I would get a breakout rash on my face or whatever. Never since I have changed my eating habits have I had another breakout I had um before I did the cleanse I started I had bladder infections and say once you get one you know it’s easy to get them again man they were starting to become a real problem for me after the cleanse never have I experienced another bladder infection before I did the cleanse they say I was alcoholic.

I went, you know, I was even admitted into Charter Peach, first which is a psychiatric and alcoholic rehabilitation center make you take these AAA classes and they didn’t really do anything but just me out excuse me trying to make me feel like I had a problem or something but after I did the cleanse I had no desire to drink whatsoever. So I do credit Dr Sebi for curing me of alcoholism as well now i did all this before I went to Honduras, Honduras is a it’s another experience um once I went to Honduras

The environment is a tropical environment, so it’s beautiful, there’s clean air, it’s clean water, fresh air, no televisions and radios. None of that poison, um you get to relax, bathe outside in the beautiful sun, eat the food. They have um a chef who serves you twice a day and they …… because they serve you in the morning at a certain time because it has something to do with how the sun rises and they serve you at 12 because you know the positioning of the sun and all this stuff that’s the last meal you know but I mean I met a lot of good people out there who um suffered from various different diseases and whatnot and um I saw my own two eyes many people recover from what their ailments were um it’s a very good experience, it was a great experience for me. I know, just to get away, just to relax just to clear my mind, you know, you don’t always have to, like I said uh diseases doesn’t always have to be a physical thing you know. I kind of feel like we’re all sick in some kind of way you know whether it be a problem you know love life, I don’t care what it is, you gotta just be stressed about anything you know cleansing can do amazing things for you um.

And then I don’t know what where else to go from here but to just let everyone know that I encourage all of you to cleanse, or to be very careful about what you put into your body, um because we are not we’re ignorant to a lot of things because you know we’re always watching television I listen to the reading you know we think that the things that they’re telling us are right and it’s not even when the juice bottle says 100 real juice it’s a lie most of the time because as soon as you turn on the back and read the ingredients is it 17% juice what’s the other 83% sugar on water so we just gotta you know open our eyes open our minds really focus on our vehicles and cleaning it out.

And um I don’t know what to say.

So, right here well um oh it’s helping me in my career.

Okay, she’s asking what type of music am I going to sing now that I have cleansed and gotten in touch with my spiritual self well my intention is to reach as many people as I can and to spread the knowledge that I am gaining, you know, and I like to spread that through love through my music through cooking. I love to cook and I think we’re going to do a demonstration today. I’m not sure but I think we are if we do then I’d like to show you guys a couple of things. A couple of quick you know healthy treats that people whip up in the blender, but um, music wise the cleanse opened me up you know because his herbs you get rid of the mucus in your system they get rid of the toxins.

So when I sing you know it’s much more powerful, my voice, the resonance, you know, tapping into… open, I felt, oh yeah the power is there.

Me too I’m very amazed at how long today.

Thank you. I appreciate that. Yes.

Thank you very much doctor Sebi has that same thing now if you see he walks in the room and it just gets bright, it’s like you turn on some light.

Thank you very much, thank you. Yes.

How did I find out about Dr Sebi? Well, it says in the bible asked and ye shall receive and that’s what I did. I wasn’t really, I didn’t know who I was asking for what I was asking for. All I knew was I had some questions that needed to be answered and one of them that was really really heavy on my mind was the cure for anything, you know. I just could not believe that there was not a cure for I don’t care what disease, especially AIDS I could not believe it, and about a week later I was in the studio talking to a producer friend of mine named Michael Anthony and he just decided to tell me about a man that he knew who had the cure and when he said those words I’m saying there’s an answer he’s gotta be the one because I was asking for the real thing coming to me telling people about this man so I said, so yes.

I don’t know maybe Dr Sebi can help answer that question I know that if you’re cleansing you know I think that those things kind of help.

Well the stars from what I understand, from what I believe, were very important. You know we all play a part in each other’s life.

I just want to add one more thing that I forgot.

You guys know that um your body organs they are always regenerating themselves. The body parts, they take about seven years to regenerate constantly rebuilding themselves. Today my skin is very different from the skin I had four years ago. My hair almost like it was when I was a baby um everything is new so I just wanted to let you guys know that If you start now about seven years you might look 10 years younger.

Dr Sebi - Because Of The Violation I Become Stressed...
Dr Sebi Answers Question On Asthma
Dr Sebi Speaks On MORINGA