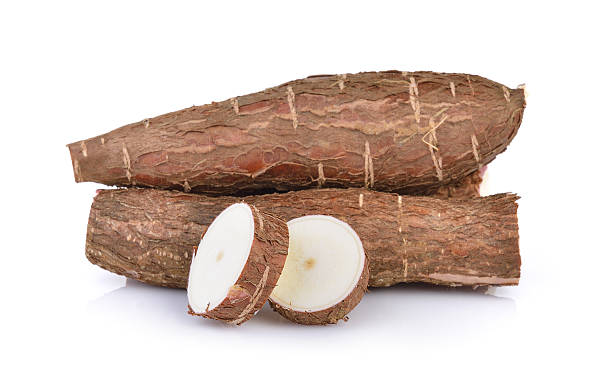 I heard you say on WIB that the African did not eat cassava. You said that cassava is uh, a hybrid, is a hybrid plant. Ah, yet somewhere in, ahhh I think in the Amsterdam news a few years ago I read that cassava, cassava, that it ah cures sickle cell or … some ground vegetable from Africa, and I thought that ah cassava is indigenous to Africa.

You thought. You see, she lives in the zone of belief. She was told, she read but she doesn’t know. Sister nature doesn’t create starches. There is nothing in nature that is starch. Nothing, you know why? You see when a burdock plant grows, you go to a burdock plant to get iron from it. As the plant matures and your rots back into the soil it is composed of what? Iron so when it decays, it decays to iron again and replace that back into the soil. But if something is starch and it decays and goes back in the soil doesn’t that hurt the soil? Because starch is carbonic acid. As for cassava, I know what you are saying, the Africans eat cassava? I dont even have to start with the Africans, lets go all the way back to the Egyptian, weren’t they eating wheat? Weren’t they eating ducks? So they were violaters all the way back ten thousand years’ So the African of today is a recipient of an impregnation by the foreigners. Cassava was made in Portugal, cassava contain arsenic. I live in a country where cassava is eaten every day three, four, five times a day and there is someone in this audience from Honduras, he would verify that too. Cassava is dangerous but what because it grows in Africa it makes it indigenous to Africa?

Well I’ll tell you what I was sitting at the table with Mohamma Ali at the Marriott Hotel in Washington which I knew I was wasting my time talking to Muhammad Ali because Muhammad Ali brain is in Europe and I can see it so I said boy…I wonder who he thinks I am anyway but I sit with the brother. I said look I want to talk to you don’t you open your mouth and tell me anything. What to say to use that if you allow me I
could have your body back where it was 20 years ago and you gain but you don’t pay, which is it? “Call my wife to see, Veronica, if she
wants me to be, to take your substance”.

I said to him ah a man is your wife sick or is it you? I mean I don’t ask my wife those sort of questions, pertaining to the business yeah but not where it pertain to me. I am independent to my wife, independent to everybody. So you are sick so I am not going to call your wife.

So anyway we argue for a little bit then we went to dinner and I sit there with my salad. Mohammad had this French soup with onions but don’t French soup with onions have cheese in it, then he had this beautiful salad with grated carrots in it. I said Mohammad, Mohammad don’t eat that soup, why? Because cheese in it, that’s a danger substance there for black people and don’t eat that salad because it has carrots.

An Egyptian was sitting at the table, Mahmoud, here is an Arab stuff himself with lamb and expect for me to have respect for his thinking. No, I didn’t fall out the sky from yesterday’s rain. Arab have no rain, that’s why your eyes go bad when you’re young because you eat the substance that brings erosion to the eyes – the barley and the lamb, don’t worry about it, keep on eating it.

The Arab Mahmoud said, Dr Sebi, I beg to differ, we grow carrots in Egypt. I said Mahmoud, I don’t care where you grow carrots, carrots grow in Egypt naturally.

I said you know Mahmoud, you are an Egyptian that has been trained white. All you Arabs are white in the head, every Arab eats Iblis food, you’re one, this was made in Holland boy, but since you Mahmoud read the caucasian books and now bring that to me. behave yourself. I got up and I went home, next question.