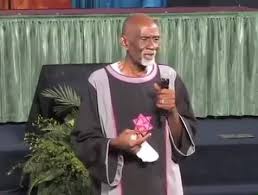 The man said, where you’re from? I said Honduras.

You kind of full of shit, that’s what he said in Spanish. Estas geno de mierda

I said sir what do you mean by that? He said look at your stomach. I had a belly I’d have 42, but I couldn’t see it, because when the stomach began to rise you never notice it. It comes very subtle and you accept it because everybody else above you your age has one too.

He said you’re have full of shit.

So you’ve been eating it. What do you ea? I eat eggs, chicken, hogs, cows, lamb, everything, because this is what I have been trained to eat. He said well it’s been hurting you. I’m impotent at 30?! At 30 I’m impotent. The last woman that I tried to have, to make love with was Audrey. What’s wrong with you? I said I don’t know. The doctors, the urologists in California he was playing his games. This Mexican came and said to me, stop eating, stop eating. I say how long a day? He said no, no, no, no, no, no, no at least 90 days. I say you are in your mind. He say I may be out of my mind but I’m 94. But you are full of shit.

He gave me these herbs.

I went home I took them, as prescribed. I had problems. I had a problem on the on the fourth day. I didn’t eat anything herbs, water and juice. Herb, water and juice but then on about the seventh day I begin to feel like wow, God, I would never eat again.

Because see my nerve were very bad and I felt very calm.

I abstained from eating for 94 days. At the ending of 94 days everything that I had before was gone from diabetes the impotence and I was going blind, I was, I was I had these glasses.

You see, the man told me, you like the rest of them is violating God almighty and you don’t even know it.

Chicken? He said not. Well at the ending of 90 days here I am 48 years ago I was 30 I’m 78 now. You see the difference, so I am still obedient to that same mandate. So now, the herbs are for the healing of the nation. Why? Why did God placed that in the Bible …according to the Bible, these are the words of God. We’re not going to question them, of course not, because we’re not that smart, right? No, so now if the herbs are for healing, when did it change?

When did it change from the herbs to a carcinogenic chemical, and why? These questions should be asked. We have the right to question everything. Why not? After all I’m the son of Africa. Who owns me? Tell me who owns me? Nobody, nobody owns me. I have the right like everybody else. And I as a young boy

I never saw a king or a queen that was superior to me. Now how could that be, when I’m the only person on the planet unique or like everybody else so I’m not better than anyone nor worse than anyone. I hold a unique position, so we, I asked the question, when did it change?

Because if it’s in the Bible, not only in Genesis, Ezekiel and Revelation and what about Jesus? Why is the daughter of Jerusalem sick, is there no Balm in Gilead? Even Jesus knew about herbs so when did it change?